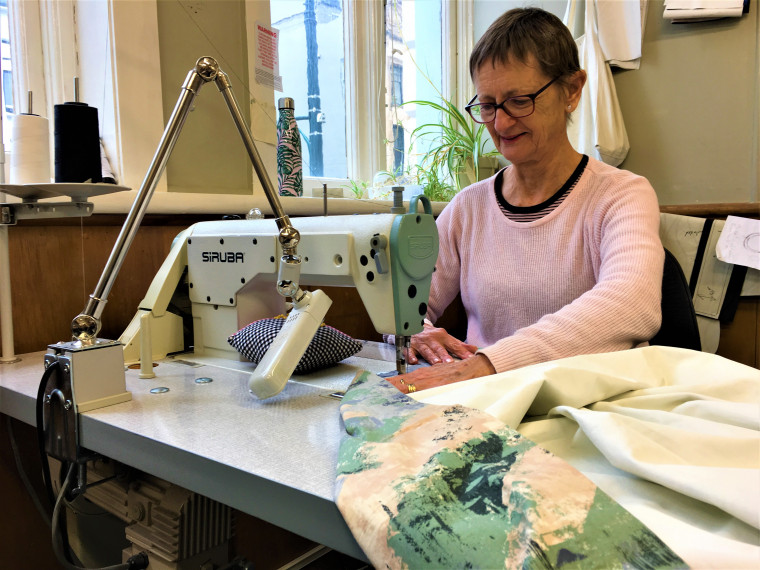 Story and photo by Angela Reid

Volunteers are making a vital contribution to a little organisation that’s striving to make a big social impact in Dunedin.

The Dunedin Curtain Bank (DCB) serves vulnerable members of our community by tackling the issues of unhealthy housing and fuel poverty. Up to 31% of a home’s heat can be lost through its windows, and living in a cold damp home can lead to illness and subsequent hospitalisation or exclusion from society. The DCB aims to counter this and create warm, healthy homes by providing lined curtains for insulation and educational resources that empower clients.

The charity welcomes curtain donations which are then graded, measured and lined before being distributed to referred community members. The finished curtains come with a bag of hooks and a pamphlet pack containing information on reducing humidity and killing mould in the home. Such literature is also available at DCB’s resource centre at its premises, 174 Princes Street, where there’s also an ecoshop boasting various bags and draught stops made from the donated fabric.

The DCB recycles hooks and curtain rails too, further contributing to its positive impact on the long-term health of both people and the environment.
Bolts of fabric have also been donated, and donations are a good way for the city’s better-off residents to give back to their community, Sara says.
The charity also gives material to groups such as the Globe theatre, who can use it to make costumes.

“We’re doing a wraparound service. It’s very community based. We’ve got a lot to offer.”

Fifteen people volunteer for the DCB at present — only the manager and a machinist are paid. The organisation also offers placements for volunteers from Workbridge, PACT and the Dunedin Training Centre, and each year it trains an Otago University social work student. It also trains people referred by the Ministry of Social Development, and Sara says she’s helped “quite a few people” transition into full-time work.

“So we cover a fair basis. People think we’re actually a really small organisation but actually we do quite a bit. It’s a nice organisation.”

It’s also expanding. The bank had been operating Monday to Wednesday but has just started opening on Thursdays too, so is calling for more volunteers.

Partnering with Volunteer South has been a “very powerful tool” that’s led to a big change in the organisation’s volunteer situation, Sara says. The DCB’s volunteer team is no longer made up mainly of retired people, and roles have been added – for example, a marketing team’s been set up and reception and sewing roles have been created.

“So we’ve defined the roles in a way that can enable youth to come in, who are in-between jobs or leaving university or who want some work experience,” Sara says. “So that side of things has developed with the way the charity’s growing – it’s definitely developed differently.”

Sara’s looking for people willing to commit and it’s also important to her that she understands what they’re hoping to get out of it.

“Because they’re here for a reason and that reason’s always different,” she says. “Volunteering has to work, it has to give equally.”

While some people volunteer at the DCB to gain experience and references for employment, there are many reasons people get involved, Sara says.
“It could be emotionally needing to get out of the house, having a safe place to come and just hang out.”

The team considers themselves a family, says Sara, who always makes sure the volunteers sit down for morning tea together. “So there’s a really good sense of connection.”

Volunteers are needed for a variety of DCB roles, including stores support, board members, receptionist and a cleaner. Sara’s particularly keen to find someone with a research background who can develop the resource centre.

Sitting opposite the resource centre, in the large room which also houses the ecoshop, is a big bin. That’s where people can leave their curtain donations. The DCB receives over 1000 donated pairs of curtains each year, Sara says, and its recycling efforts save up to six tonnes of landfill annually.
The DCB’s been operating since 2013. Since then it has taken 1074 referrals, helped 2283 people and provided over 3000 pairs of curtains, altering and lining more than 6400 individual curtains for those in need (as at May 2021).

The charity’s volunteers can pat themselves on the back for playing their part, knowing they’re helping the DCB realise its vision of creating warmer homes and healthier futures.