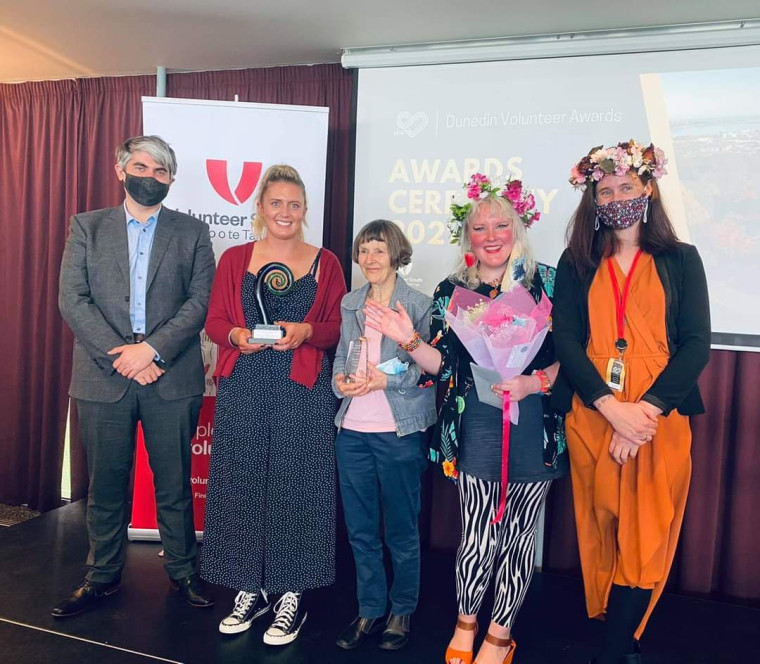 It’s also given the programme’s two Dunedin co-ordinators a useful wee gem to drop into conversations with others.

“It’s a good talking point, for sure,” Steph Finnie (pictured, second from left) says while sitting beside fellow co-ordinator Sam Robinson in the office they share at Presbyterian Support Otago (PSO). The pair are “two peas in a pod”, Steph says, and work for PSO’s Family Works service.

“[We can say] ‘Oh by the way, we also won this award, which is pretty swanky…’ It’s certainly something we like to make people aware of a little bit. Because it [the progamme] has been going such a long time and it has been so successful. The drivers of that have been the volunteers. It’s all about them really,” Steph says.

The programme’s been going since 1991 but Steph had only been in the co-ordinator role a couple of months when she accepted the Overall award at the Dunedin Volunteer Awards in 2021. She’d already collected the Education, Child and Youth Development award.

This year the Buddy Programme’s a finalist in the Transformative category of the revamped Volunteer Awards, held on September 24.

By Steph’s side at the 2021 ceremony was Betty Laing (pictured, centre), who’s been volunteering as an Adult Buddy for 10 years. These buddies serve as mentors for children aged 4-12, in a valuable one-to-one relationship that provides support, encouragement, fun, and a positive, consistent, adult presence in a child’s life. They spend two or three hours each week with their Young Buddy and do whatever they wish together, although free or low-cost activities are encouraged.

She and Steph liaise with the child’s family. They also recruit the Adult Buddies — interviewing and vetting the volunteers before training them and matching them with a child. They have about 35 partnerships on their books and another 30 or so children waiting for a buddy.

The children come from a range of circumstances and are referred to the programme through avenues such as schools, social workers or the families themselves. They may be part of a large family whose caregivers struggle to give them enough one-on-one time, or perhaps they find it hard to make friends, have learning difficulties or low self-esteem. Sam stresses there’s no single type when it comes to these children’s backgrounds and encourages Adult Buddies to be open-minded about who they will be paired with.

“We’re very privileged to work with a very giving, very open-minded, empathetic crew of volunteers, who 99% of the time go above and beyond for their young people,” Steph says.

“And it’s just really humbling to know that there are people out in the community that care and want to be part of that change as well. Restores faith in humanity, that’s for sure.”

While a broad range of people volunteer as Adult Buddies, most fall into one of two groups, Sam says. The first group are younger people, mainly students, who don’t have children of their own. Steph admires these volunteers. She feels they’re “expanding their horizons and seeing that genuine need to help in their community, and they want to help”.

Sam agrees. “I think it’s a real millenial-generational thing… it’s a generation that does really believe in service to the community and volunteering. There’s a lot of younger people that make volunteering a really key part of their life… So we’re more than happy to facilitate those people to do that.”

The second key group of volunteers are older people who are retired or have flexible working hours.

“There are children out there that don’t have grandparents. So that’s a beautiful relationship,” Steph says. “And they [the volunteers] bring that life experience. They’ve generally raised children of their own, which is obviously unquantifiable in terms of a skill because it’s not always straightforward, working with children.

“I think the younger ones [volunteers] learn as they go a bit more, where the older ones kind of have that in their kete already. They just provide different things but are just as positive as each other really.”

Anyone aged 20+ is welcome to volunteer — Sam says she and Steph are open-minded and there are few reasons they would turn people away. Volunteers need to undergo police vetting and referee checks and be able to commit to their buddy for at least 12 months, as consistency’s crucial for these children.

New recruits receive training and support, and Steph says she and Sam focus on building a positive and transparent relationship with their volunteers. They encourage communication, as they understand these people have lives of their own too.

“Self care of an adult buddy is very important as well,” Steph says.

The two co-ordinators are in a unique position to see the rewards these partnerships bring the Young Buddies. Steph says they can see trust building and rapport developing. “You can see it in their being, more than anything.”

Sam says it’s heartening to see this positive change in the youngsters. “We get warm fuzzies on a regular basis.”

The programme provides a space for these children to escape life’s complexities, Steph says. They gain the consistent presence of someone from outside their family, who’s just for them, “who is a positive role model, who is an adult who is successful in their own life and can show a young person what that looks like, because it looks like lots of different things for lots of different people… They’re just like a breath of fresh air,” Sam says.

These volunteers can also become part of the family. Steph and Sam have come across people who’ve been buddies in the past and continued their relationship into adulthood. “There has been talk of people attending weddings,” Steph says.

She says the buddy relationship also reassures the families that there are people out there who care, who are willing and able to provide what they can’t, and that their child can get out in the community and have some fun.

And it’s not just the children having fun. Sam says volunteers often enter the programme wanting to make a positive difference and feeling the responsibility that comes with that — so they’re surprised to find they enjoy the time as much as their Young Buddy. It’s an opportunity to gain a new perspective and can allow the adults to do things they wouldn’t normally do, like going to a fun children’s movie, Sam says. Some Adult Buddies even feel they’re “gaming the system” because they’re having such a good time, she says.

“I think being with a young person is always kind of fun. It sort of pushes you into that zone of trying to have fun and see the humour and the lighter side of life.”

Sam and Steph understand some people may not come forward to volunteer because they feel the weight of responsibility. But actually, just being yourself, bringing your own strengths and differences, and consistently showing up are all that’s needed, and it’s quite empowering for the adult, they say.

“You don’t need to be this person up on a pedestal to be a good role model for a young person. You just need to be authentically yourself,” Sam says.

“On their own they [an Adult Buddy] might not feel like they’re making a huge difference. But if we’re doing that for 30+ young people every year for 30 years, and then seeing the impact that that will make on our local community, for those young people growing up having had such positive pro-social experience, I think it adds up.”