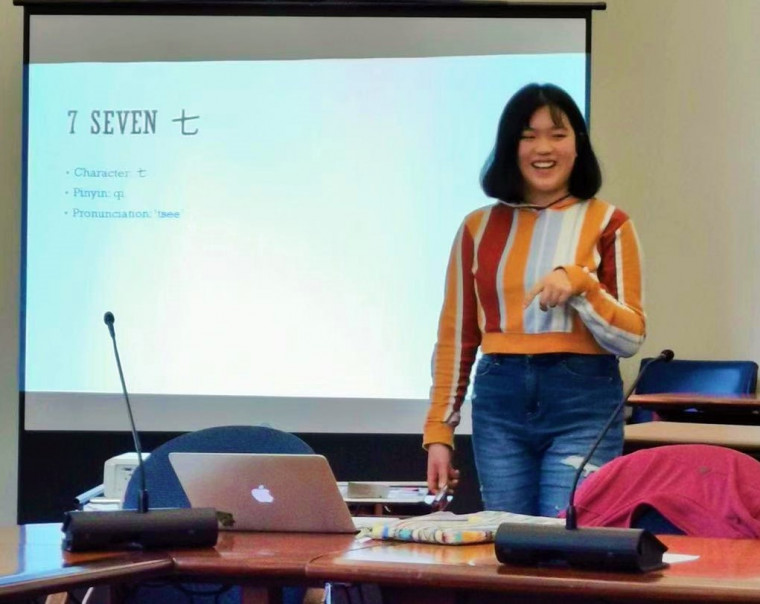 Angela Fu’s only 18 years old but she’s already an old hand at volunteering.

It’s become part of her “rhythm of life”. Her volunteer experiences have helped her mature and grow as a person and created a bridge between her youth and older generations.

So lately, like many other volunteers, Angela’s been frustrated. The Covid-19 pandemic’s been a massive roadblock on the teenager’s volunteering journey.

“I kind of feel empty now, cos Covid has stopped a lot of things,” Angela says. “But I’m sure I’ll get back on track soon.”

It’s mid-February 2022 and a transitional time in Angela’s life. It’s also a rather stressful, but exciting, time — she’s just two days away from moving into St Margaret’s College, a residential hall at Otago university. But Angela’s put aside packing and preparing for a while, to chat over Zoom.

As she speaks, the country’s operating in the Red Light setting of the government’s traffic light protection framework and Dunedin’s bracing for an Omicron wave. Angela’s been bombarded with Covid-related emails from the university. She’s heard that Omicron cases have already popped up in the student community. As a St Margaret’s resident, she’ll have to wear a mask “24/7”. Orientation Week events have been cancelled. Courses will be held online. It means this newbie student’s getting an unusual introduction to university life.

It also means that Angela’s volunteering, which was “part of my routine, definitely, at least before Covid”, has been disrupted too.

Angela’s been volunteering for years already, having started when she was a 12-year-old Year 8 student at Columba College. The school had a volunteer service programme “which was, you could choose where you wanted to volunteer and you do certain hours and you get a badge and stuff,” she says. “And I thought it was a good segue to do some volunteering and be useful.”

That year she volunteered as a dish-hand at her mother’s friend’s café during the school holidays. She doesn’t really remember the specifics.

“I just remember washing a lot of dishes. That was one year I got really good at washing dishes.”

The next year, 2017, Angela combined volunteering with her love of music when she began playing piano for the residents at Yvette Williams Retirement Village once a week.

“My grandmother used to live in Yvette Williams and when I went to visit her there would be lots of other people volunteering there, and I guess it sort of was like ‘Oh wow, I can do that’,” Angela says.

More recently, she’d been going there three to four times a week to play and spend time with residents, before Covid stopped her visits. “So that’s pretty sad... it was really fun volunteering there.”

The grandmother Angela visited at Yvette Williams had been her first piano teacher — Angela’s been playing since she was just 3 or 4 years old. In Year 4 or 5 she started learning the violin, and at age 11 or so she picked up flute lessons too. She’s volunteered her musical talents to perform at the likes of special events, gigs and charity events, and at her local church.

Angela has a talent for languages too; she’s a fluent speaker of French and Mandarin as well as English. In Year 11 she started sharing this gift with the community, teaching Chinese classes through the Dunedin Chinese Culture and Arts Association (the photo shows her leading her first class). Her students include children of Chinese immigrants whose parents, or they themselves, want them to be more connected to their heritage, Angela says.

Angela took on other volunteering roles while at school, including being a school librarian and a member of the road patrol. She also volunteered for the university’s red bill gull project, which involved designing posters, doing outreach work and gathering and combing through data.

With so much going on, the biggest challenge to Angela’s volunteering in her final year of school was her packed schedule. On top of her volunteering and NCEA studies, she was an academic prefect and was involved with the peer tutoring programme. Angela’s demanding schedule meant she had to assess and adjust her volunteering commitments. She still went to Yvette Williams but for shorter stints. That brought guilt. “I felt really bad but I had to also take care of myself and make sure that my other commitments, like the gull one, were fulfilled properly,” she says.

That year, 2021, Angela was also named a finalist in the Youth Leader category of the Dunedin Volunteer Awards.

“I was pretty surprised, because when you do those things, when you volunteer or you do extra-curricular [activities], you don’t think about what it might amount to,” Angela says. “I do volunteering because it’s like giving back. It’s something that I like doing. It’s not something I do because I want to get something out of it, like some sort of honour or some materialistic recognition out of it.”

In fact, this concept of giving back to society is a value Angela’s grown up with. Her parents had always encouraged her to be useful in society, someone society needs.

“So volunteering is my way of sort of showing that I can be of use, even as a student or even as someone who has no professional skills. I can still be useful, no matter what.”

Angela feels age is a factor when it comes to volunteering. She says there were things she did in high school that she wouldn’t have been able to do when she was that 12-year-old volunteer dishwasher. She didn’t have the maturity or ability to handle things back then.

She says different ages suit different volunteering roles, but when someone reaches their late teens or so it’s better to volunteer more. As well as providing an opportunity for young adults to gain people skills and life lessons, “you help others, in that you bring a fresh perspective, where you bring diversity, and you bring different ways of solving problems”.

Angela’s benefitted from the various perspectives she’s been exposed to through her volunteering too. It humbles her and keeps her mind and eyes open, she says.

“You see all kinds of people. And it’s the people you work with, it’s seeing different sides, different perspectives of society. And it tells you that not everything is just what you see at school, or the people you interact with —there’s a whole spectrum of other things.”

This interaction with other people is the best thing about volunteering, says Angela, a self-confessed People Person. Her volunteer work exposes her to different ages and generations. Her Chinese classes were “fun” because she could interact with a variety of age groups, including children. At Yvette Williams, she enjoyed talking with residents and hearing the stories of older people, some of whom hadn’t interacted with Asians much before.

Angela says it felt good knowing she was helping others and satisfying to be needed and doing something worthwhile. Volunteering in general is a rewarding experience, she says, “because you’re benefitting the people around you but at the same time you’re enriching yourself.” This mutual benefit means volunteering isn’t a selfish endeavour.

“If I do good, or I try my best to help other people, then in some other ways, inadvertedly, subconsiously, I also grow from it and gain something from it.”

There are other ways in which Angela’s volunteer experiences have led to personal growth. For example, not everyone at Yvette Williams appreciates her, she says. She’s grateful for that though because it’s helped her develop compassion.

“Some of them are really sensitive to noise or they’re uncomfortable with unfamiliar faces. But it’s definitely helped build understanding and empathy toward them… it helps me put myself in someone else’s shoes or understand why they’re thinking this way.”

Volunteering’s also helped Angela learn to control her temper and in turn she’s “become a better person”, she says. She’s realised that having a bad day is no excuse to be unkind or take things out on others and has even become fond of the retirement-village residents who don’t like her.

Angela’s also developed the ability to let things go: if she doesn’t let things like the behaviour of “little kids being little kids” at Chinese classes bother her, she can let go of things in daily life too, she says.

“It’s made me a more resilient person, I guess, and it also helps with other volunteering tasks and… in communication or in my prefect things I did at school. And I know it’s going to help in my [university residential] hall as well, with lots of other young people. And I hope it helps in my career — I know it will, no matter what career I end up doing.”

While Angela’s not sure what her future profession will be, she’s already laying the groundwork for a career in the healthcare sector. This year she’s studying health sciences, the foundation course for students aspiring to get into medicine, dentistry, physiotherapy or pharmacy.

And while the pandemic’s created uncertainty around what will happen at university and when Angela will be able to get back to her Chinese classes and visiting the retirement village, she’s optimistic she’ll be able to fill any volunteering gaps and keep her volunteering journey going.

“I’m sure there are opportunities I can find at uni that keeps my rhythm of life going,” she says. “I’m sure there’s always other things I can do, even if it’s not what I did at high school.”