The Value of Volunteering 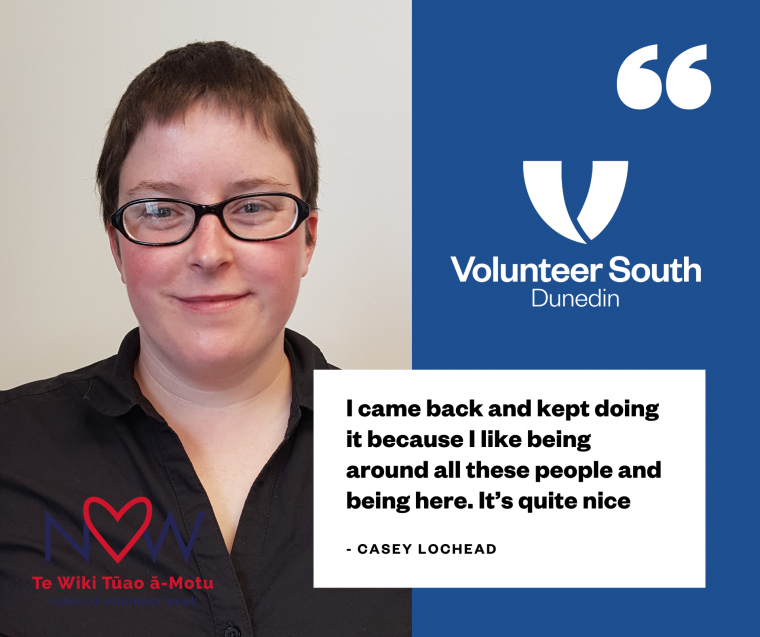 Casey Lochead volunteers on Volunteer South’s frontline. And she’s been doing a fair bit of matchmaking.

She’s part of a squad of eight Front Office Volunteers who greet and look after visitors and help ensure things keep ticking over behind the scenes of the Dunedin office. This front office team will soon become 10-strong and there are plans to grow it further. These volunteers make up about half of Volunteer South’s entire Dunedin volunteering team and this National Volunteer Week we want to give a shout-out to them all (19 volunteers and counting) and recognise the great work they do.

The Front Office Volunteers are a diverse group of people who work three-hour shifts. Some, like Casey, do one shift a week; others work one shift a fortnight. Their assigned tasks can vary to suit the individual’s preferences, skills and interests but there are generally two sides to the front office role.
One side involves administrative tasks such as maintaining the database — the organisation moved to a new one mid-2020, a “big undertaking” that Casey helped implement — answering and making phone calls, dealing with emails and managing the Google calendar.

Then there’s the face-to-face aspect, which includes welcoming visitors and playing matchmaker. When people approach Volunteer South hoping to be connected to a volunteer opportunity, Casey or one of her front office colleagues will sit down with them for an informal interview. During these discussions, the Front Office Volunteer will try to match the potential volunteer with a suitable, available, role from Volunteer South’s database.

They’ll ask the potential volunteer about their skills, experience and interests before weeding through the role descriptions in the database and suggesting appropriate roles. “Hopefully they get two or three roles that they’re interested in,” Casey says.

The potential volunteer can then register their interest for a role on the spot using the Front Office Volunteer’s tablet. They’ll then be talked through the next steps and what will happen with the information they’ve provided, which is sent off to the organisation they want to connect with. If the potential volunteer hasn’t heard back from the organisation within five working days, they’re encouraged to contact Volunteer South, who will follow up with the relevant organisation.

Casey says it’s interesting to see the variety of people who come for an interview and the different things they’re interested in.

“Hopefully we are placing people into suitable positions that they like and getting things done around the community.”

Signing up as a volunteer this way, through Volunteer South, is easy, Casey says. “It is very easy to get signed up and there are a wide variety of opportunities out there, no matter what your challenges might be — you don’t necessarily have to drive or be available during work hours or have any specific qualification or anything. There is probably something for you out there and it’s not as difficult as you think.”

Casey hadn’t volunteered much herself before she joined the Volunteer South team because she thought it would be hard to get in touch with people. “But because of the service we offer here, it’s really not.”

Casey’s journey with Volunteer South started in November 2019 when she was job hunting. The Ministry of Social Development suggested she apply for a paid internship at Volunteer South, to be subsidised by the ministry through one of their programmes. Casey joined the volunteer front office team for a month or so before getting the intern job, which involved developing and administering Volunteer South’s Migrant Programme. She spent about three months doing that at the start of 2020 before the programme became a casualty of the Covid 19 pandemic and was put on hold.

But having already had a taste of the front office role, Casey continued her connection with the organisation. “So I [had] learned a little bit about it [the office role] and I came back and kept doing it because I like being around all these people and being here. It’s quite nice,” she says.

Casey says she’s benefitted from her Volunteer South role by gaining experience and connecting with different people. She wants to eventually work for the national government in a research or policy-related role.

Casey also volunteers for the environmental group 350 Dunedin and as treasurer for Dunedin Pride. She volunteers “to learn new things, meet new people and feel like I am doing something positive for the community”. She believes volunteering plays an important role in society, in that it helps people and causes who can’t otherwise afford it.

And what’s the best thing about volunteering with Volunteer South?

“That I’m able to help organise things and make things run more smoothly for everyone who’s doing the jobs and everyone trying to get into volunteering here. Like, the easier we can make it, the better.”