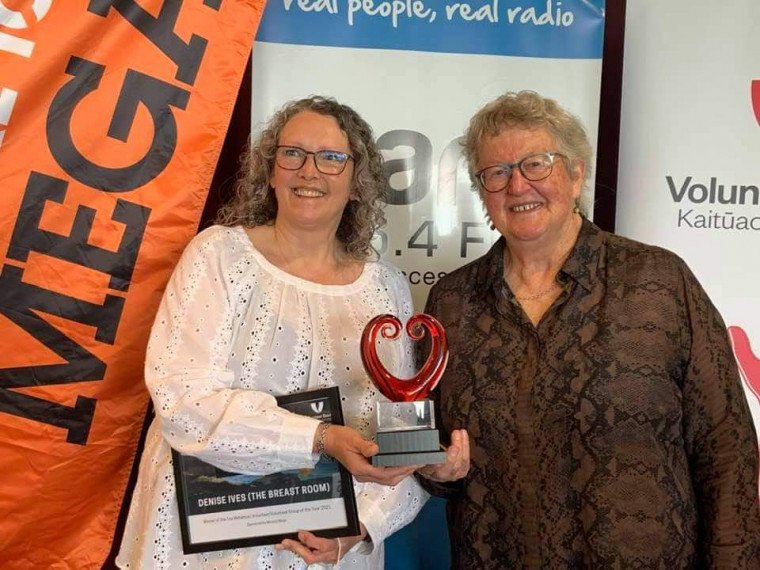 At a ceremony in October 2021, two women were announced as joint winners of an Individual Volunteer Award. The pair claimed another prize that day too: they’d been connected.

Denise Ives and Eleanor Doig (pictured left and right respectively) had never met before that Dunedin Volunteer Awards ceremony. But the duo’s kept in touch and Denise recently put up her hand for a project administered by Eleanor’s volunteer group.
“It doesn’t just end there with the award and you walk away,” Denise says. “It’s another connection that’s turned into something else… and it’s going to be beautiful.”

The two women have a few things in common: both support their community by providing spaces for people to be heard; both are team players who felt uncomfortable or guilty about being nominated for an individual award; both volunteer for South Dunedin-based groups.

Denise is founder of The Breast Room, a free service she set up in 2011 to support breastfeeding families. Its drop-in clinic was open every Thursday before Covid restrictions hit, but Denise and her team of four other volunteers are still making home visits and doing the odd online consultation.
“I wanted to create a safe space for people to come to where they could have that one-to-one connection with somebody who would sit with them, hear their story, help them explore their options and let them find their way,” says Denise, who worked as a breastfeeding counsellor in her native England before emigrating to Dunedin in 2009.

Eleanor’s just been named on the 2022 Queen’s Birthday Honours List, as recipient of a Queen’s Service Medal for service to the community. She’s chair of the South Dunedin Community Network and one of its founding members. The network was established in 2018, prompted by the significant flooding of 2015 which highlighted the area’s environmental vulnerability and need for ongoing communication with authorities and community engagement.

The network unites people in the wider South Dunedin area through its vision to communicate, connect, celebrate and advocate for and with this community. It achieves this through events like community hui — which foster communication with local government and organisations — and the South Dunedin Street Festival.

Eleanor says her volunteer job as chair is “to keep the vision alive”.

“I do hold the vision of South Dunedin Community Network being a force for activating our community, which is a vulnerable one. So that the community is alive and connected and feeling able to have a voice heard when decisions are going to be made about climate changes… We’re very determined that South Dunedin will not have things done to it without their voice being heard in a real way.”

In 2021 the SDC Network signed up for a government programme which involves asking the community what they’d like to see happen then making a community plan, with the opportunity to access up to $2million over five years to turn that plan into reality.

The network calls this the Dream South D Project, and “the lovely Denise” was keen to get involved. She’s one of seven volunteers on the project’s steering group and Eleanor says she’s “a little star”.

Denise had been inspired after winning that Individual Volunteer Award with Eleanor. She says it had been “just the best thing” for two South Dunedin groups to be recognised for their work in the community and “it was just awesome to be sharing it with somebody like Eleanor”.

“Eleanor and I just clicked,” Denise says. “And Eleanor is just such an amazing human, you can’t help but like her. So, I think, just the excitement that two South Dunedin people, or groups… had won this award really just made me feel as though it shouldn’t stop at that award. Somehow, we should do something more.

“So when the Dream South D Project came up… I was really happy to put my hand up and see if there was anything I could do. Because our [The Breast Room] focus has always been to base ourselves in South Dunedin, so it’s important to us as well for that reason but it just felt right to have something more come out of us winning that award — for it not to just stop at that point but for it to grow into something else as well, that’s even bigger.”

South Dunedin’s clearly important to both women. “It’s not a snooty outfit. It’s down to earth and lovely,” says Eleanor, who lives in the wider South Dunedin area and used to work for Idea Services where many of the people she supported lived in the suburb.

Eleanor’s volunteered for various things throughout her life, including leadership roles with the Girl Guides, a high school board of trustees and Otago University’s chaplaincy service, and at the Dunedin and Wellington hospices.

“I think volunteering is an essential part of being human,” she says. “I think that the capacity to contribute to your community builds a sense of belonging and a sense of connection and a sense of meaning.”

Eleanor “passionately” believes volunteering benefits individuals, groups and the community. She acknowleges the important role volunteering can play for people feeling disconnected, lonely or frustrated, and the valuable community connection it creates for them.

“If you can find a place where you can meaningfully help, it makes a big difference to mental health and to opportunities… I encourage people to find a space, find a niche, that they are interested in, and go for it.”

Denise has certainly found her niche. She established The Breast Room to continue using the skills and specialist knowledge she’d been paid to share in England. She simply believes that breastfeeding families deserve access to support, when and how they need it.

“So if the only way to do that is for us to do it free, then that’s what we have to do,” she says.

Denise’s volunteer work in this field doesn’t stop there either: she also volunteers for La Leche League New Zealand, another non-profit providing breastfeeding and lactation support. Her main role there is writing articles for ‘Kiwi Parent’ magazine.

She’s also part of the small volunteer team who runs the biennial iNDx art exhibition which features work by autistic artists. She’s volunteered at animal charities too — with the RSPCA back in England and at Dunedin’s SPCA.

“If you volunteer and you feel like you’re helping somebody or something, whether it’s people or animals, it makes you feel good. So I think if you feel good, then that kind of shows and spreads out into other areas of your life. If you feel good inside then I think you treat people nicely. So I think that it just has a knock-on effect,” Denise says.

“To me it’s a kindness, and I think kindness is just one of the most important things to me in my life… If you’re kind to other people, even when they’re having a really s****y day, it makes a difference to them.

The Volunteer Awards 2022 nominations are being accepted from 21 June - 24 July 2022. Nomination forms are here.

To find out more, head to volunteerawards.nz.